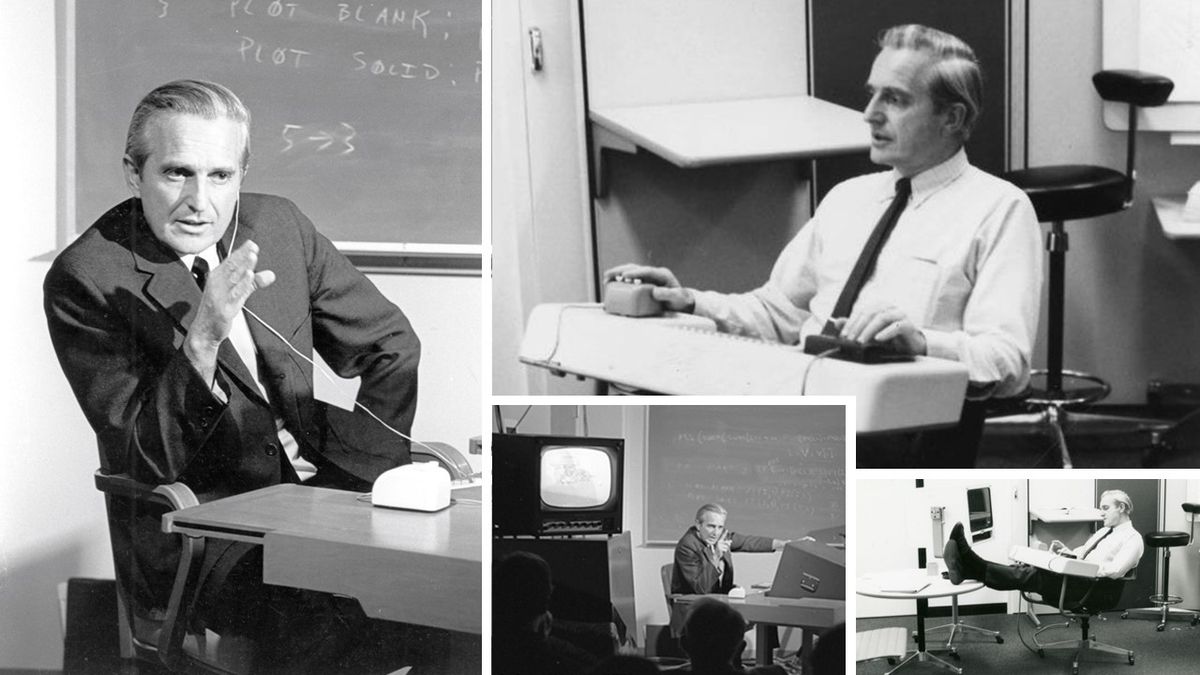 Imagine demoing 8 groundbreaking, never-seen-before technologies, decades before they would become a reality for the average user. That’s exactly what Douglas Engelbart did 54 years ago today (December 9th, 1968) at the Computer Society’s Fall Joint Computer Conference in San Francisco.

At the time, computers were room-sized, operated by only one user at a time, didn’t include a CRT display, were used almost entirely for number crunching and bomb testing, and were seldom seen by the general public. But Engelbart had a vision of the future where knowledge workers could use computers as tools to boost human intellect to solve the world’s problems.

He invented and demoed the beginnings of the modern personal computer and software as we know it today. The demo debut included:

And Engelbart and his team took a huge risk presenting these technologies at the conference.

Anyone who’s ever given a live software demo knows that things can go wrong. But Engelbart’s team had more at risk than a potential computer crash. He was presenting on stage in San Francisco in front of a terminal with the computer 30 miles away in Menlo Park.

Engelbart’s team spent months assembling a custom set-up for the presentation. They used two leased video circuits from the phone company with a microwave link and transmitters between the two sites for video. Plus, they built two dedicated 1,200-baud homemade modem lines that were high-speed for that point in time.

Engelbart started with an introductory question to the crowd, “If in your office, you as an intellectual worker were supplied with a computer display backed up by a computer that was alive for you all day and was instantly responsive to every action you had, how much value could you derive from that?” This probably seemed like an absurd question to those in attendance because desktop computers didn’t exist at the time.

Then he proceeded by showing his display, projected on a huge screen for the audience. He moved his cursor with his mouse, clicked on words that were hyperlinked, to reveal other screens on his computer, and rearranged, reordered, recategorized, and restructured lists and sub-lists on his screen. This seemed like magic to the audience until they switched to the camera view above Engelbart, to reveal what he was doing to make this magic happen.

After demonstrating his interactions with the computer, located 30 miles away, he videoconferenced with his colleagues in Menlo Park while they both edited the same document. They also communicated through text messages, an early version of email, during the video call.

The demo was a huge success, and the audience gave Engelbart a standing ovation at the end.

Engelbart’s demo was the first of its kind. As a result, his computer ended up being the first host attached to the Defense Department’s Advance Research Projects Agency (ARPA) and received the first message transmitted over ARPANET, the precursor to the internet. Plus, his system, the NLS, short for oNLine System, would be used by hundreds of organizations.

Several of Engelbart’s team members went on to help Xerox develop the Alto, the first personal computer equipped with a user interface and mouse, fashioned after the one demonstrated. Then many of these elements would be incorporated into Apple computers and the windows operating system.

Demos are worth the risk

The mother of all demos was a high-risk demonstration that brought leading-edge concepts to computer scientists. Since the presentation was a success, it ultimately lead to the evolution of personal computing as we know it today. What if Engelbart hadn’t taken the risk?

Demoing is difficult, but it doesn’t have to be a high-risk endeavor. We salute and support all professionals who present demos on a regular basis.

Get a personalized demo with our team.